A Tale of Two Women

Grandmas Cheah Siew Chee, 80, and Ameena Amnal, 70, have a lot in common although they originally come from different parts of the world. one is from Hui Ann, China’s Fujian province and the other from Satang kolong, Madras, India,

They have not been back to their native villages which they left more than half a century ago. Both came to Penang to join their husbands when they were young. Now at the autumn of their life, they are largely forgotten – living in squalor in the inner city of George Town. Despite their age and poverty, both grandmas are healthy and cheerful – a reminder to many modern-day city folks the many virtue of hard labour and a frugal life. Beneath their humble appearance lies the strength of human spirits and courage. 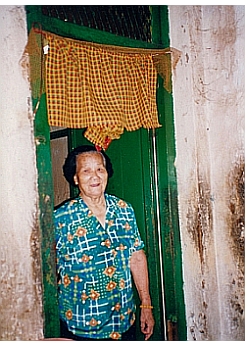 “I worked in construction sites all my life since I arrived, until my legs were no longer able to bear the heavy load,” said Cheah cheerfully. She was forced to retire five years ago at the age of 74, when she fell and broke a leg while clearing debris at a construction site in Macalister Road. The women of Hui Ann, Fujian Province, used to be a familiar sight in the country. Known for their colourful dress, tenacity and hard work, they were ubiquitous in the construction sites decked out in their distinguished red headdress and coarse blue cotton Samfoo.

In the days when machinery were few and giant cranes unheard off, building materials and earth were moved by hands. Hui Ann women mostly did this heavy work – shuffling earth and heavy loads on their shoulders they toiled ceaselessly. It would be unimaginable for the building industries to be without them. Today few remember them.

We hear success stories of immigrants stepping ashore from crowded hold of junks and steamers with nothing and becoming rich overnight. The late tycoon, Datuk Loh Boon Siew came from Hui Ann and started life in his adopted country as a lowly coolie. How he rose to be one of the richest men in Malaysia is well documented.

Grandma Cheah embodies the long-suffering woman from a period when prejudice was still strong, and women’s rights unheard of. Half a century ago, she boarded a junk and sailed to Malaya to join her husband in Penang. Cheah said she was 32 when she arrived. She was married at the age of 16 into the Koay clan. Three months after wedding her husband came to Malaya and she was left behind in China to take care of her blind father-in-law.

“I was abandoned and left with my in-laws. I didn’t see my husband again until 16 years later when I came to join him in Penang.”

For today’s modern women, it must be unthinkable, how she endured the lonely years living with her in-laws in feudal China. In Penang reunited after the long lapse, the couple stayed in a former horse stable in Noordin Street paying a monthly rental of RM13.50. Since the repeal of the rent control in 2000, the rental has increased to RM62. The leaking roof is patched with wooden boards. The mews have 12 tiny cubicles on the ground floor and 12 on the top floor. There is no bathroom and the two broken down toilets are shared by 24 households.

The common passageway is where they cook and take their bath (wearing sarongs) from taps fixed by the residents. There is no water supply, the residents had to construct the water pipes themselves, she said. She worked at construction sites for RM5 a day until 74, an age when many of us would have gone to meet our maker.

Her husband died a year ago, aged 82. Her only son who is a daily-paid labourer has moved out to a low-cost flat with his wife, leaving their two sons aged 9 and 7 in her care. Last month on International Women’s Day, Cheah was honoured by the Malaysian Local Democracy Initiative (Melodi), a human rights NGO, as the unsung hero of the country. She was given the Penang Builder Award, which reads “In recognition of women’s contributions to the country who were neglected by society.”

Perhaps her biggest triumph is her abundant human spirit and cheerful bearing which has seen her through thick and thin. “It is an inspiration to all who have seen her,” says a young neighbour.

She says the Koay clan’s ancestors (of her late husband) were Muslims. “That’s why when we die, we cannot take pork any more,” (meaning they cannot use pork to pray to their ancestors). Another surprise, like Muslim village doors in rural China, the door of her cubicle is painted green, the only one in Noordin Street.

If not for the fact that the house [she is staying in with her extended family] could collapse and in all likelihood bury some of them, no one could have known that Ameenal Amnal, 70, exists at all. Muda Lane is a short, narrow street of pre-war residential shop houses in a mixed neighborhood of Chinese, Tamil and Muslim families.

There is a toddy shop, Chinese kongsi (clan) house, and Muslim shops. Ameenal’s dwelling is conspicuous for the facade of the upper floor is broken and patched by decaying boards. It is quite a shock to step into the house. The top floor has collapsed completely, corrugated sheets have replaced the roof and large cracks appeared on the walls.

Ameenal says the house has been in this condition for more than 10 years. First the roof collapsed and the family could not afford the RM2,000 to replace it with asbestos sheets. Then the floorboards of the first floor and staircase came crashing down. The family live in three cubicles of plywood and plastic sheets on the ground floor. One cubicle is occupied by her married daughter and her husband, one by her 12-year-old granddaughter, (according to Muslim custom) while she sleeps in the third with the two unmarried sons and the 11-month-old grandson. Another son sleeps on a plank board outside her cubicle.

Blue plastic sheets on the top floor and the cubicle keep the rain and falling debris away. Initially she paid RM70.40 rental monthly, but over the past 20 years the rent was raised and stood at RM112 last year. Beginning this year (2000), the rent was raised to RM900 despite the fact that the place is not fit for human habitation. She says the landloard has given her until April to pay up or face eviction. The family cannot afford it as all the working sons and daughter are earning less than RM500 each.

Ameenal says she has been staying in the house since she came from India 45 years ago and the house has deteriorated year by year. She was married at 20 and soon after her husband left for Penang to work as a stevedore (dock labourer). Five years later, the husband came back to India and brought her to Penang. Her husband died 20 years ago and she has not been back to India at all.

Since her arrival from India she has been working as a domestic help in an Indian restaurant. She cleans the house, serves food and does all menial work without a break until five years ago when age has caught up with her. She earns RM250 a month, she says.

Dressed in her colourful sari and shawls, she cuddles and carries her 11-month-old grandson everywhere she goes despite her advanced years. Still robust and healthy and surrounded by her extended family, the smiling Ameenal is unperturbed about her housing problem, come April when she faces eviction. “I hope the government will give us a low-cost flat in River Road where we only pay RM100 per month,” she says cheerfully.

Author’s note: two years later, the roof of Ameenal’s house collapsed killing her grandson.Ong Boon Keong, head of SOS (Save Our Selves) called a press conference to highlight the plight of the poor and the author’s story. This was reported in the Kwong Hwa Chinese Daily: February 21, 2002

Filed under Malaysiakini (MY), The Star Newspaper

Tagged as Tale of Two Women