Looking for Misor the Akha Girl in Malaysia

Author’s note: Among various assignments I had undertaken as a journalist, rescuing young girls tricked or sold into prostitution ranked top on the list. Unwittingly I was drawn into it as empathy for the poor young victims arose, together with the hope to see the scourge eliminated and the scoundrels brought to justice.

Many a time I was asked to help and participate in the rescue operation posing as a client to secure the girl before the arrival of the raiding party.  Prior to this there would be a recce with an Akha headman (Yaker) if it was a tribal girl, if it was a Yunnan Chinese girl I would be doing the talking. In my first assignment in 1986 I was asked to escort a young Thai mother and her rescued baby [stolen from Bangkok and sold in Malaysia] back to Thailand after the Malaysian Court in Kuantan signed the released paper; while the two Special Branch officers from the Malaysian consulate in Songkhla took the Thai NGOs, Theeraporn and his staff, to Kuala Lumpur for a tour.

I became good friends with the NGOs officials and police officers. They would inform me when there was a rescue. To succeed it had to be secretive, even the local police were kept in the dark to avoid the pimps being tipped off.

Things just happened – Prostitution and woman-trafficking became my specialty. The windfall were the documentaries I did with the BBC, Channel 4 London, Japanese and Hong Kong TVs.  Ironically in 1998, our Akha hero, Yaker, came to see me in Bangkok asking for help to rescue his daughter in Seremban. The lead was his daughter had phoned from Seremban and asked the father to take her back to Thailand. Then the phone went dead.

In no time Mokoto Uzaki producer of Nihon Denpha News and Theeraphon came forth with the funds and three of us – Theeraphon, Yaker and me – flew to Kuala Lumpur.  Investigation by our special branch friend now stationed in Alor Star drew a blank. “I have contacted my friends, Seremban is quite a big town, with many bars and brothels, it’s impossible to find with just the name of the girl called Misor,” he said.

Back to the mountain village on the Thai-Burmese border: Misor and mother (left and 2nd left) with author and villagers celebrating New Year January 1999

Situated in a shop-lot along one of the main streets, the nondescript bar was completely shuttered up, its metal sliding door and iron grill shut and padlocked. For a moment we thought we had come to the wrong place. We went up the staircase by the side of the shopfront to the first floor.

An Indian man with just a towel wrapped around his waist, followed by a prostitute, emerged from one of the row of rooms and walked towards the bathroom. “Where is the bar?” I asked. He pointed to another staircase going down to the ground floor.

We went down and hey presto! There was the very dark and dingy bar. There was a door leading to a lorong (back lane) where customers enter and leave discreetly. The lorong was pitch dark so nobody could see the coming and going-on.

Some guys were chatting and drinking around the bar counter near the entrance. Two Malays in jeans and photographer’s vest, presumed to be police detectives, sat on bar-stools drinking and smoking. A heavy set Chinese man, late forties, in long sleeves batik stood chatting with them. My hunch was right; he must be the ‘taikoh’ (big brother) Mr Tan. 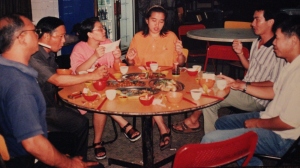 There were four of us – Yaker, Akha headman and father of Misor; Theeraphol, head of Minority-Protection NGO in Bangkok; Rajah our driver from Kuala Lumpur; and me. We had flown in the evening from Bangkok and driven straight from newly opened KLIA (airport) with Rajah.

“We are here to look for Misor, the girl from Thailand. Your girlfriend Ah Mei who has gone back to Chiang Rai told us Misor works for you. Where is she? “

He looked puzzled and bewildered and denied knowing Ah Mei. We learned later that Ah Mei the pimp who brought Misor to Malaysia was actually the girlfriend of his son who had just been arrested by the police.

A bar girl standing nearby interjected and said she knew Misor; she had left the bar some months ago and went back to Thailand, the girl exclaimed. “That couldn’t be true, here is the father’ just arrived from Thailand, looking for her,” I said pointing to Yaker.

While this was going on, the two ‘detectives’ got up and quietly slipped away out to the lorong. I thought this was a good sign – people didn’t know who we were and giving us a big berth.

I told Mr Tan to ask the girls the whereabouts of Misor. Sure enough one of the girls answered, “Misor is now working in another bar in another part of the Town.”

“Can you please tell our driver, Rajah, the location – the bar and street names, the exact address,” I pleaded with a smile.

It took awhile to find the bar as none of us know the town well. But Misor was not there; she had quit some months back, the bar owner said. Her boyfriend, Ah Lum, had bought her out of the brothel and got her a job as a cook in a restaurant, he added. “I can take you to the boyfriend’s house, but you must wait until I close the bar,” the boss told us kindly.

We had started the search at nine in the evening and it was not until well past one a.m. before we found Misor.  We came to the apartment but Ah Lum’s car was not there. We waited and waited, just we were about to give up and leave, a car pulled up and there was Misor sitting beside the driver.

Misor had stayed illegally in Malaysia for three years without passport or any identification paper. She left her mountain village Ban Hinkong, near the Burmese border, with two Yunnanese (Thai called Chin Haw) women from a nearby village. She was easily convinced when they told her how easy it was to find work and make money in Malaysia.

Like most Akha girls she was fair, good-looking and illiterate. Also like Akhas who had worked with the Chin Haws (remnants of the Kuomintang army) she spoke Yunnanese which is close to Mandarin.

Misor was married to a Yunnanese Muslim at the age of 16. Unfortunately after bearing a son, her husband who was quite a successful businessman became an opium addict and took to gambling, father-in-law Yaker said.  The marriage broke down and a year after Misor left, the husband was found dead at the foot of a mountain cliff, apparently high on opium, added Yaker.

Misor said her friends took her to Sungei Golok and they just walked across the border checkpoints without any luggage and nobody stopped her. Their bags were carried and brought over by other people. They boarded a bus and came to Kuala Lumpur where she stayed a month. She was coached to speak Mandarin, Malaysian-style. “It’s no problem, after a month of practice I was speaking like any Malaysian and nobody would suspect I wasn’t a Malaysian Chinese,” she said laughingly.

From Kuala Lumpur she was brought to Seremban.  Ah Lum, the savior, said he came to the Wah Thor bar and met Misor. He would take her out when she was not working but the boss did not like it. Finally he paid RM4,000.00 to buy her freedom from the pimp.

Ah Lum said the 1997 economic crisis came with a heavy blow.  With business downturn and economic crisis looming, the police were cracking down hard on illegal immigrants. He was worried that one day the police might catch up with her.  Meanwhile Misor managed to call home and spoke to her father  but before she could tell her exact location, telephone contacts were cut off. [the father being illiterate wasn’t able to jot down foreign name places] I t was revealed later that because of the economic crisis, Ah Lum had to sell off his mobile phone.

The irony was not lost that Yaker (dubbed the Akha James Bond by the British Press) who had rescued more than 800 tribal child prostitutes in Thailand in the past 15 years, had now fallen victim – his eldest daughter lured and sold into prostitution in Malaysia.

It took three months of tracking and preparation before we could attempt to bring Misor back to Thailand. Yaker was well known among Malaysian Special Branch officers based in the Songkhla Consulate.  We had a great reunion and dinner at a Thai restaurant with the SB officer in Alor Star the night we arrived from Seremban. The next morning Misor was brought safely across the border into Thailand.