Not so long ago in July 1992 Hitoshi Takase, a Japanese TV producer of Nihon Denpa News, and I were pampered and treated almost like kings. The rough and tumble frontier town of Ruili on the China-Burma border was not exactly a place for royalties and nobles to hang out but we were never-the-less treated like one by our Chinese hosts – the Lim and Goh families.

Big brothers Lim and Goh were millionaires, the nouveau riche of China. They had made their fortune as traders in a quiet and remote corner of China, not many people had heard off let alone visited.

They hailed from Fujian Province, thousands of miles away on the economically-vibrant eastern coast of China. To the native Yunnanese who were mainly pastoral and hardy highland farmers, the mercantile Hokkiens seemed a different bred and culture.

Goh and Lim moved to the remote Yunnanese interior on the Burmese border not long after the 8 August 1988 pro democracy upheaval in Rangoon. Today they and their fellow Hokkiens sit on the vast and rich business networks controlling most of the trades and commercial activities in and out of Burma.

The huge cross border tradings between China and Burma is mind boggling. Burma produces the best jade and ruby in the world, it also has the biggest teak forest reserves. Because of the economic sanctions imposed by the US and Western Europe, Burma imports virtually everything from China – from electricity, building materials, machinery, consumer goods and household appliances.

Going the other directions to pay for these goods are teak wood, jade, rubies and precious stones, agricultural produces, fresh sea food trudged across the remote border by porters to be air-flown to Fujian and Kwangtung. And there are also the illicit heroin, opium and Burmese prostitutes flooding the border.

Like elsewhere in the region, business in Burma are run by ethnic Chinese. Like Singapore and Penang, the people running the business are ethnic Hokkiens. Naturally they will contact their Fujian networks in China to buy and sell. Thus all the border trade came under the control of the Hokkiens. Ruili though in Yunnan tribal area is a Fujianese town where Hokkiens is widely spoken in the streets. 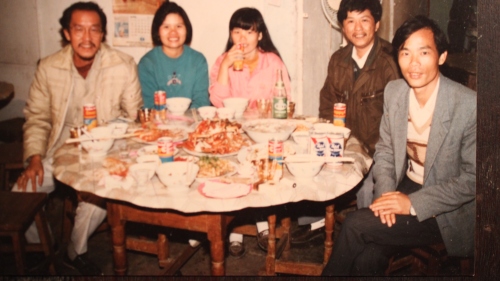 Goh and Lim became very rich. They moved their families from Fujian to Ruili. In 1992 both of them have a sister each, age 22, and unmarried. In China it is considered old already if you still cannot find a life partner. Family members contacted relatives in Hong Kong and husbands were found; arrangements were made for them to go to Hong Kong and get married.

But there was a snag. They could not get passports. The Chinese government at that time made a ruling not to issue passports to all Fujianese. The reason being: Chinese illegal immigrants were making headlines all over the US and Europe. The ruling came about after investigations by American FBI and Chinese police revealed Fujian Triad connections and control behind the illegal human smuggling. And several murders attributed to the Fujian Triads were uncovered.

Through their Burmese contacts big brother Goh and Lim got their sisters overland to Rangoon. From there they got Burmese passports (after paying a lot of money) and flew to Bangkok where they got a connecting flight to Hong Kong.

The young Lim and Goh were basically country girls first time out of the country and travelling alone. They could only speak Hokkien and Mandarian. At the Hong Kong airport the suspicious immigration officer asked them what they intend to do in Hong Kong. Innocently they said ‘to work’. The officer asked them to write it down on a piece of paper which they did. Next instant they were detained and put on the first flight back to Bangkok.

Meanwhile the prospective bridegrooms and score of relatives outside the arrival lounge waited and waited. Back home in Ruili initial worry turned to gloom and panic as days dragged on and there were not a word from the girls and their whereabouts. The worse could not be discounted – kidnapped and sold into sex-slavery, even murdered by sex maniacs.

When Takase and I stumbled upon them in a honky-tonk hotel in Bangkok Chinatown while doing a documentary on Chinese illegals and trafficking of Chinese women, we thought we had hit jackpot.

We found the girls in the room of an old Chinese fortune teller who had advertised his service in a poster on the groundfloor eating shop of the hotel. Posting as clients was like ‘god-sent’ to penetrate into the rooms and observe ‘what’s-going-on’ in the sleazy hotel. We saw this classic looking old Chinese scholar with wispy white beard who said he was fomerly a teacher in a Kuomintang village up in mountains of northern Thailand.

Now he was reading fortune to earn some money for his old age.  Lying on the other twin bed were the two young girls looking forlorn, and weary.  While my Japanese friend was having his palm read, I lost no time chatting up the girls, and managed to piece together their story and misfortune.

After landing back in Bangkok and coming out of the airport, they didn’t know where to go or what to do next. They loitred in the airport dazed, worried and confused. Fortunately not long a Chinese Thai, sensing their plight, came and talk to them and offered help. The good Samaritan showed them where to change the US$70 (which they were each allowed to take out of Burma) into local currency and directed them to take a taxi to Chinatown to stay in a cheap hotel.

Soon their money ran out and that was when they bumped into the ex Kuomintang teacher turned fortune teller who took them into his care. The KMT teacher later told us he was going to help the girls return to China by the overland route through Burma. He said he knew people and the route because the Kuomintang army once occupied the area from northern Thailand, Shan state of Burma right up to the Chinese border.

Fortunately I visited them the morning they were leaving for the railway station and just learned about the plan. I was skeptical and knew the danger and risk of being caught by the Burmese army. [see Keng Tung jail story] The teacher said he had to move fast because the Thai police were checking everyone in the hotel and he didn’t want to be ‘implicated’ with the girls.

I took out 500 baht and my name card and gave it to one of the girls. “Please phone me if there is trouble and need help!” I said. Sure enough, a week later there was a frantic call from the girls saying they were back in the hotel and the teacher asked us to come immediately to take the girls. It was too dangerous to pass through Burma and he had done his best and failed, he said.

We took the girls back to Takase’s apartment. The first thing we did was to get the girls telephone back home via Kunming, the provincial capital. Imagine the joy – the families had completely lost touch with them for over three months.

Getting them back to China proved to be tricky, ordinarily it would be quite impossible. Luckily the families knew a famous Yunnanese artist in Bangkok who had held many exhibitions officiated by the Chinese ambassador in Bangkok. The artist managed to get the ambassador’s special approval to issue visas to the two girls travelling on Burmese passports.

Normally this wasn’t allowed. Burmese passport holders as a rule must apply for visas at the Chinsese embassy in Rangoon. Another month passed before we put the girls onboard the plane bound for Kunming. And the story ended happily with the two ‘Burmese’ girls turning back into Chinese girls once they got out of the Chinese airport.

To end our documentary we flew to Kunming and took the overnight bus to Ruili to meet the girls and families. We were hailed not exactly like heroes but feted day and night. Every meal turned out to be a banquet with wine flowing liberally and the best of the best cuisine of Ruili – fresh Burmese seafood packed in ice, trudged through the mountains by porters. We had them every meal before they were air-freighted to the big restaurants in Fujian and Kwangtung.